What happened of one day
They brought her in a cart
Her eyes were open
Blood gushed from her mouth
Her partner saluted
Came near, caressed us and said 'Balu'
We saw mutely everything
We searched our umbrella
Our roof, our mother.

That night we five
Stuck closer and
Wrapped up to the coverlet
Taking it to be mother's affection
Already we had nothing
Now there was even no mother
We awake all night
letting tears
Now we became fully unattached. 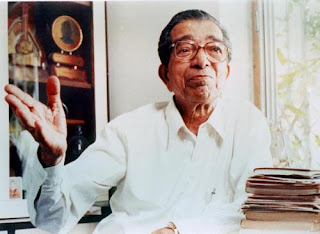 About The Poet:
Narayan Gangaram Surve was a Marathi poet from Maharashtra, India.He was born on October 15, 1926. Orphaned or abandoned soon after birth, he grew up in the streets of Mumbai, sleeping on the pavement and earning a meager livelihood by doing odd jobs. He taught himself to read and write, and in 1966 published his first book of poems Majhe Vidyapeeth ( My University). Surve actively worked in the workers' union movement in Mumbai and supported himself as a schoolteacher. In 1998, he received a Padma Shri award from the government of India for excellence in Literature & Education. He died due to old age and after a brief illness on August 16, 2010.
(A Two part Documentary on Surve is here)
posted by Unknown at 7:33 AM 22 comments:

The Telephone Conversation by Wole Soyinka

The price seemed reasonable, location
Indifferent. The landlady swore she lived
Off premises. Nothing remained
But self- confession “Madam, I warned,
“I hate a wasted journey- I am African.”
Silence. Silenced transmission of
Pressurised good – breeding. Voice, when it came
Lipstick-coated, long gold-rolled
Cigarette- holder pipped. Caught I was foully
“HOW DARK?...... I had not misheard……
“ARE YOU LIGHT OR VERY DARK?” Button B, Button A, stench
Of rancid breath of public hide-and –speak
Red booth. Red pillar box. Red double-tiered
Omnibus squelching tar. It was real. Shamed
By ill-mannered silence, surrender
Pushed dumbfounded to beg simplification.
Considerate she was, varying the emphasis-
“ARE YOU DARK? OR VERY LIGHT?" Revelation came
“You mean –like plain or milk chocolate?”
Her assent was clinical, crushing in its light
Impersonality, Rapidly, wave length adjusted,
I chose “West African sepia”- and as afterthought,
“Down in my passport.” Silence for spectroscopic
Flight of fancy, till truthfulness clanged her accent
Hard on the mouthpiece. “WHAT IS THAT?” conceding
“DON’T KNOW WHAT THAT IS” “Like brunette.”
THAT’S DARK, ISN’T IT?” Not altogether,
Facially, I am a brunette, but Madam you should see
The rest of me. Palm of my hand, soles of my feet
Are a peroxide blonde. Friction caused
Foolishly, Madam – by sitting down, has turned
My bottom raven black- One moment – sensing
Her receiver rearing on the thunderclap
About my ears- “Madam” I pleaded “wouldn’t you rather
See for yourself?”

About the Poet:
Akinwande Oluwole "Wole" Soyinka is a Nigerian writer, poet and playwright. He won the Nobel Prize in Literature[1] in 1986,[2] the first African to be so honoured. In 1994, he was designated United Nations Educational, Scientific and Cultural Organization (UNESCO) Goodwill Ambassador for the promotion of African culture, human rights, freedom of expression, media and communication.
posted by Unknown at 1:19 AM No comments:

The Art of Poetry by Jorge Luis Borges

To gaze at a river made of time and water
and remember Time is another river.
To know we stray like a river
and our faces vanish like water.

To feel that waking is another dream
that dreams of not dreaming and that the death
we fear in our bones is the death
that every night we call a dream.

To see in every day and year a symbol
of all the days of man and his years,
and convert the outrage of the years
into a music, a sound, and a symbol.

To see in death a dream, in the sunset
a golden sadnesssuch is poetry,
humble and immortal, poetry,
returning, like dawn and the sunset.

Sometimes at evening there's a face
that sees us from the deeps of a mirror.
Art must be that sort of mirror,
disclosing to each of us his face.

They say Ulysses, wearied of wonders,
wept with love on seeing Ithaca,
humble and green. Art is that Ithaca,
a green eternity, not wonders.

Art is endless like a river flowing,
passing, yet remaining, a mirror to the same
inconstant Heraclitus, who is the same
and yet another, like the river flowing. 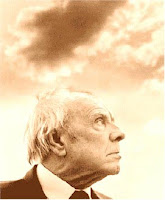 ges (Spanish pronunciation: [ˈxorxe ˈlwis ˈborxes]), was an Argentine writer, essayist, and poet born in Buenos Aires.In 1914 his family moved to Switzerland where he attended school and traveled to Spain. On his return to Argentina in 1921, Borges began publishing his poems and essays in surrealist literary journals. He also worked as a librarian and public lecturer. In 1955 he was appointed director of the National Public Library (Biblioteca Nacional) and professor of Literature at the University of Buenos Aires. In 1961 he came to international attention when he received the first International Publishers' Prize, the Prix Formentor. His work was translated and published widely in the United States and in Europe. Borges himself was fluent in several languages. He died in Geneva, Switzerland, in 1986.
posted by Unknown at 5:38 AM No comments:

True love. Is it normal
is it serious, is it practical?
What does the world get from two people
who exist in a world of their own?

Placed on the same pedestal for no good reason,
drawn randomly from millions but convinced
it had to happen this way - in reward for what?
For nothing.
The light descends from nowhere.
Why on these two and not on others?
Doesn't this outrage justice? Yes it does.
Doesn't it disrupt our painstakingly erected principles,
and cast the moral from the peak? Yes on both accounts.

Look at the happy couple.
Couldn't they at least try to hide it,
fake a little depression for their friends' sake?
Listen to them laughing - its an insult.
The language they use - deceptively clear.
And their little celebrations, rituals,
the elaborate mutual routines -
it's obviously a plot behind the human race's back!

It's hard even to guess how far things might go
if people start to follow their example.
What could religion and poetry count on?
What would be remembered? What renounced?
Who'd want to stay within bounds?

True love. Is it really necessary?
Tact and common sense tell us to pass over it in silence,
like a scandal in Life's highest circles.
Perfectly good children are born without its help.
It couldn't populate the planet in a million years,
it comes along so rarely.

Let the people who never find true love
keep saying that there's no such thing.

Their faith will make it easier for them to live and die. 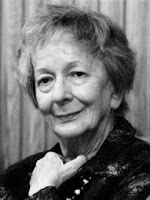 he 1996 Nobel Prize in Literature. In Poland, her books reach sales rivaling prominent prose authors[citation needed] — although she once remarked in a poem entitled "Some like poetry" [Niektórzy lubią poezję] that no more than two out of a thousand people care for the art. Szymborska frequently employs literary devices such as irony, paradox, contradiction, and understatement, to illuminate philosophical themes and obsessions. Szymborska's compact poems often conjure large existential puzzles, touching on issues of ethical import, and reflecting on the condition of people both as individuals and as members of human society. Szymborska's style is succinct and marked by introspection and wit.
posted by Unknown at 5:34 AM 1 comment:

Lorca's City That Does Not Sleep

In the sky there is nobody asleep. Nobody, nobody.
Nobody is asleep.
The creatures of the moon sniff and prowl about their cabins.
The living iguanas will come and bite the men who do not dream,
and the man who rushes out with his spirit broken will meet on the
street cornerthe unbelievable alligator quiet beneath the tender protest of the
stars.
Nobody is asleep on earth. Nobody, nobody.
Nobody is asleep.
In a graveyard far off there is a corpse
who has moaned for three years
because of a dry countryside on his knee;
and that boy they buried this morning cried so much
it was necessary to call out the dogs to keep him quiet.
Life is not a dream. Careful! Careful! Careful!
We fall down the stairs in order to eat the moist earth
or we climb to the knife edge of the snow with the voices of the dead
dahlias.
But forgetfulness does not exist, dreams do not exist;
flesh exists. Kisses tie our mouths
in a thicket of new veins,
and whoever his pain pains will feel that pain forever
and whoever is afraid of death will carry it on his shoulders.
One day
the horses will live in the saloons
and the enraged ants
will throw themselves on the yellow skies that take refuge in the
eyes of cows.
Another daywe will watch the preserved butterflies rise from the dead
and still walking through a country of gray sponges and silent boats
we will watch our ring flash and roses spring from our tongue.
Careful! Be careful! Be careful!
The men who still have marks of the claw and the thunderstorm,
and that boy who cries because he has never heard of the invention of the bridge,
or that dead man who possesses now only his head and a shoe,
we must carry them to the wall where the iguanas and the snakes
are waiting,
where the bear's teeth are waiting,
where the mummified hand of the boy is waiting,
and the hair of the camel stands on end with a violent blue shudder.
Nobody is sleeping in the sky. Nobody, nobody.
Nobody is sleeping.
If someone does close his eyes,
a whip, boys, a whip!
Let there be a landscape of open eyesand bitter wounds on fire.
No one is sleeping in this world. No one, no one.
I have said it before.
No one is sleeping.
But if someone grows too much moss on his temples during the
night,
open the stage trapdoors so he can see in the moonlight
the lying goblets, and the poison, and the skull of the theaters. 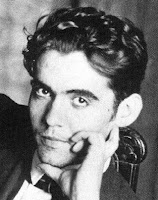 Spanish poet and dramatist, Lorca was a talented artist and a member of the 'Generation of 1927', a group of writers who advocated avant-gardism in literature.
He was murdered at the beginning of the Spanish Civil War [1] by persons likely affiliated with the Nationalist cause. He is thought to be one of the many victims who 'disappeared' and were executed by the Nationalists.[2Major works; Sonnets of Dark Love, Ode to Salvador Dalí, Poem of Deep Song, Lament for Ignacio Sánchez Mejías...
posted by Unknown at 9:37 PM No comments: 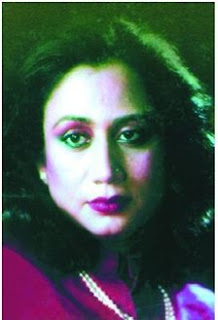 ALAMGIR HASHMI is an English poet and scholar, who has also translated many Asian writers. His work is widely anthologised. His latest poetry books are A Choice of Hashmi's Verse (1997) and The Ramazan Libation (2003). He has been Professor of English and Comparative Literature in Asian, European, and American universities. She used the first-person feminine pronoun, which is rarely used in Urdu poetry even by female poets. The feminine perspective of love and the associated social problems were her theme.
posted by Unknown at 8:15 PM No comments:

I
One youth slides off towards the abyss

And is followed by another . . .
Happiness will soon be obsolete

A boy writes down a line of poetry
One line, alas, just one single line :

“Above the Bridge of Twenty Four the moon dispels the night”
II
Winter, South of the River

You cannot focus your thoughts or find a theme 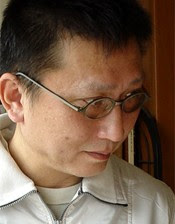 Born in Sichuan province in 1956, Bai Hua seems to have decided from an early age to pursue a writing life. After completing an English degree at the Guangzhou Foreign Languages Institute, he went on to study an MA in Western Literary Trends at Sichuan University.
He comes across as a highly serious writer, steeped in the classical Chinese tradition, but keen to apply its lessons to the contemporary world. The short poem ‘Reality’ seems to express his view of writing poetry as a painstaking harvesting of the real.
posted by Unknown at 1:06 AM No comments: